adinosii Member, NW M9 Playtest Posts: 4,294 Arc User
August 2020 edited August 2020 in Bug Reports (PC)
I have a rather long list of minor issues and annoyances, and will be posting them in a random order when I have the time to take screenshots and such to document them

None of those issues are game-breaking, but they are all annoying, and getting rid of annoyances is nice, right?

I went and bought the Hellfire engine weapons...not because I needed them, but just to fill a gap in my collection.

When you restore the weapons you get a pop-up stating they will be BtA after restoring:

However, when you actually do restore them, they turn out BtC. 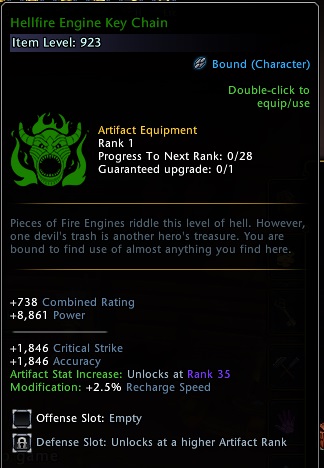 This is not relevant for me, as I was just restoring them to fill my collection, but if the same issue is present elsewhere, it could become a serious source of annoyance, if people are restoring items and expect to be able to give them to alts.

Hoping for improvements...
Post edited by adinosii on August 2020
3