catgirldesu Fluffy FoxPosts: 993 Arc User
May 2018 edited May 2018 in General Discussion
Hello! I know I'm not one of the knowledgeable people regarding PWCN announcements and information, but since a lot of those knowledgeable people have stopped posting on the forums (or quit the game entirely) I wanted to bring this to the players' attention.
I used Google Translate so if someone can provide better, more reliable information please do so! But until then, here are the things I understood from the news post. Please take these with a grain of salt.

1. A new area opens in the northeast part of the Western Steppes which was previously locked. There will be new dailies and historical phases in this area.

2. A new quest line will be added expanding Neverfall's story. It's related to the reappearance of Goodhill and other events that happen after we players killed Master Kafasha and the Changeling matriarch, Aida. The quest line will lead to the new area.

3. There will be a new Boundary level (like Shifting Sky, Twilight Sky).

4. There is a new way of obtaining Vitae by killing a special type of monsters called "Wandering Souls". Souls are located in the Primal World and the Western Steppes. The amount of Vitae you can gain from killing souls per day is limited.

5. Amount of Vitae required for the new Boundary level.
According to this thread the new boundary would be:

A total spirit increase of 555 from Twilight sky Lv10 to New Sky Lv10.
From @shopcheese (based on @asterelle's table)

6. A new feature is added: refining tomes. You'll be able to refine your tome up to +12 and activate additional attack attributes based on the refinement level.

7. You cannot transfer armor/weapon refines to a tome. You can only transfer tome refines to another tome. Transferring refine level can only be done from bound tomes, and apparently the target tome you are transferring the refine to will become bound automatically.

8. In order to refine tomes, you will need a new item. You can also use other refinement items such as dragon orbs. There are new types of refines aids. Their function is the same as the current refine aids and can be obtained from somewhere (it mentions bags). Maybe we need to use these new types of refine aids for the tome and the old ones don't work. Source. Screenshot of the tome refining interface. 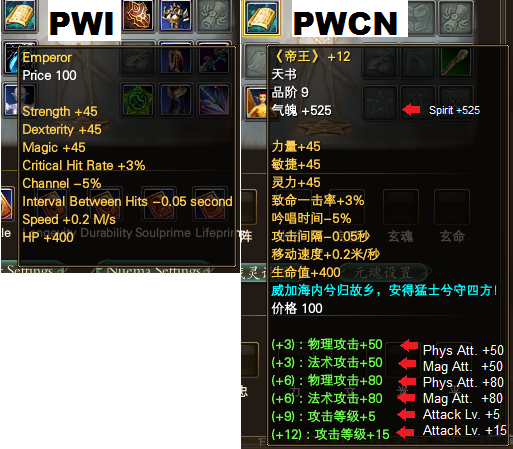 10. After passing through a number of instances, a special NPC might appear that sells rare items. I assume you have to clear these instances and I also assume it's going to be instances like UP, DH etc. because we don't get updates on old instances anymore.

I cannot translate the Boundary changes because I don't know the Chinese names for them and Google translates then in different, confusing ways. Someone with actual knowledge in Chinese would have to do it.

Rescue the Raccoons
- Vitae and rewards were not changed

No more starchart items. (*It actually shows up as 108 shiny flowsilver coin for some reason... It shows up as 108 in pwdb too atm so I think it's really 8.)
From @asterelle

13. Miscellaneous changes:
- A daily quest for the final boss in the Icebound Underworld has been added (Star Chart rewards from FSJ were moved here).
- Two dailies were added in the Active Points system.
- Rewards for reaching level 5 and level 10 of the new Boundary have been added.
- The power of monsters in the Western Steppes has been reduced.
- After receiving a number of titles in the Adventure Kingdom, you can get 3 combined titles with additional stats.
- Something about being able to exchange ornament stones (?) for a different type. Maybe it's something like changing deities to jades etc.