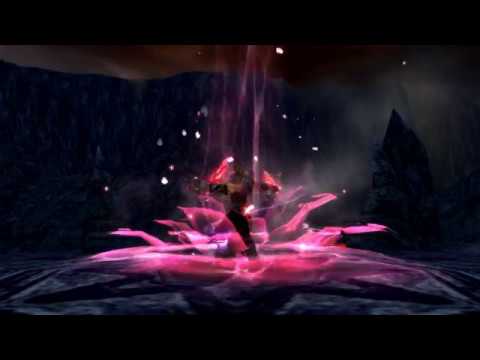 Let me explain better this video.

Barbarian gameplay is mostly oriented to abuse of Violent Triumph (Gold Glyph = 100% critical hit + 80% damage on the next hit) + Armageddon. Combo is OP, so it is correct to use as main threat.
Mighty Swing with Argent Glyph help to catch the target and it is 100% chance to paralyze (60% normally). There come the easy way to attack: 100% ranged paralyze + combo.
100% chance to paralyze on Mighty Swing increase the cooldown of the skill from 6 seconds to 20 seconds and it remove almost any chance to CC the target.
This problem is bypassed by the fact that the Barbarian got his lethal combo (with paralyze is hard to prevent the damage because only genie can be used) so just need to stay alive enough on a squishy attack level build, to spam the combo.
In this way STR genie has been replaced by VIT/MAG genie and Sage is the perfect path to fit this consistent gameplay adding more physical attack and survivability.

To resume: Barbarian now play around Violent Triumph combo, and set everything else on surviving. (VIT/MAG genie and Sage build)

As you all know, I never follow the reason or what everyone else do. I follow my heart and what I find more fun and challenging to play.
So… I’m there… a squishy Demon Barbarian that play with VT combo.

Why I’m not going sage then?
The fact to depend totally from one skill is pretty bad for me. Of course, sage build is very consistent and combo is more lethal. But… I passed many years playing DD build, I was the only one deity barb around for long time and people was used to know me for my damage and deadly combo. If I killed people in the past without VT/Armageddon why I can’t do the same now?

I think a bit on what I want to do… what is the advantage and the potential to be demon now?
For sure I can’t be tanky as a sage barb. Good point of demon was the critical hit, but now the combo is already 100% critical hit chance. Still… I learned to cc well in the past, so taking back STR genie with Occult Ice and use normal Mighty Swing (60% chance, but 6 seconds of CD) with the crit buff from Bestial Onslaugh make me able to put a really high pressure between lock and combo because I have multiple way to perform a kill.

Playing with a demon build make it not possible to sit on an easy linear gameplay, but with the right skill you can fill the gap with sage build playing more aggressive.
With this video I mixed old school gameplay (classic mighty swing/occult ice lock and DD with Onslaught) with new VT/Armageddon combo, cc while VT is in CD or just adding VT on a normal skill to kill during stunlock. As demon I can also use Armageddon without VT, and count anyway on a 75-80% chance to do a critical hit.
Result was very interesting and fun. I did much more kills than usual and in very different ways.
I’m just sorry for the last XNW (the one in Frost nation) because it was laggy and some of my death was really stupid. Also… I don’t use STR genie often and I was managing it bad. Next time I need to improve on this point.

Important is to understand that I’m not saying that demon is better than sage, but I just want to give a reply to all that people that was asking me if demon build is dead, or if not, how to play it at the max potential.