Grim Kaals guide to some pleb procc based “DPS” tank

wilbur626 Member Posts: 912 Arc User
February 2020 edited February 2020 in The Guard Barracks
Spending most of my time soloing around the Swordcoast in search of hidden transmutes, I have found that this setup is the most efficient for solo farming with the Fighter in its current state. Why go Dreadnaught when Vanguard can dish out as much (maybe even more?) damage due to the flawed mechanics in the DPS paragon path? (Last statement proven invalid by @groo111 and @reeper#9973 )

The introduction of the Hell Pit event made me want to deal some damage, while still being able to tank the latest content. Later, the introduction of 1225+ item level gear in Mod 18 made the build viable for TOMM.

I have been working on this setup based on inspiration from @dread4moor old school Bowser Iron Vanguard, where the basic idea was to get hit to deal damage. In my setup, this is achieved from hitpoints, actionpoint gain, dmg reflection and power.

At very high ilvl, this build will reach all needed stats for M18 content (35000 counterstat).

If running LOMM or lower level content i like to swap the augment for Xuna, just to compete for the top of the paingiver chart

- A more “fun” alternative to the high survivability builds
- Viable at all levels with right investments from the beginning
- No need for loadout swapping tank/dps
- Self-generated aggro, easy aggro management
- Inexpensive (until extremely high item level)
- Gear setup can be used for all 3 tank paths in the game


For this build to work properly, there is a few items that are must-haves :

For the AP/Hitpoints part of the build :

-Tanner’s Hardened Leather Ring,or any of the epic versions. (Deal 50% of hp as dmg to first mob that hits you after daily cast).
-Every possible source of +AP gain.

For the power part of the build :

- Ebonized Breastplate for AOE, single target chest to be decided (+1% power if dealing more than 10% hp in one hit, stacks to 10%)
- Baby Owlbears presence (10% chance to deal 50% of your power as damage if you fail to crit).
- +5000/10000 power mount equip power
- + Power Stronghold boon
- Alabaster set for multi mob fights, Burnished for boss fights.

For the reflect part of the build :

- 1 Tenebrous enchant. (Up to 8% chance to deal 8% of HP as dmg when hitting)
- Briartwine armor enchant (Reflect 4,5% of dmg taken. The chance to root every 10 sec is just a novelty, the fact that the damage reflected has a
0% chance to crit is what makes this build shine as it proccs both the owlbear cub and tenebrous enchant.

DISCLAIMER : The fact that the briartwine reflect counts as player doing damage, thus proccing owlbear + tenebrous, may be a bug. This bug doesnt mean much for classes that have proper DPS paragons, as they kill mobs fast enough as it is. For tank specced characters however, this is a huge damage increase. Update : @skingdev#1102 confirmed that the briartwine is working as intended, and this is not to be considered a bug.

The only stats you need to pay special attention to is Critical Avoidance, Awareness, HP and Power. All other stats should be at 85000 for countering Mod 18 mob stats. Critical Avoidance is an exeption for fighters, due to the Unshakable Shieldarm feat (+10% Crit Avoid when shielding), thus it hits cap at about 81850. Awareness caps at 95000. When you hit stat caps, focus every single statpoint on Power and/or Hit Points. Combat Advantage is not that important for this build, as the manticore procc/owlbear/tenebrous does not gain a damage boost from CA. 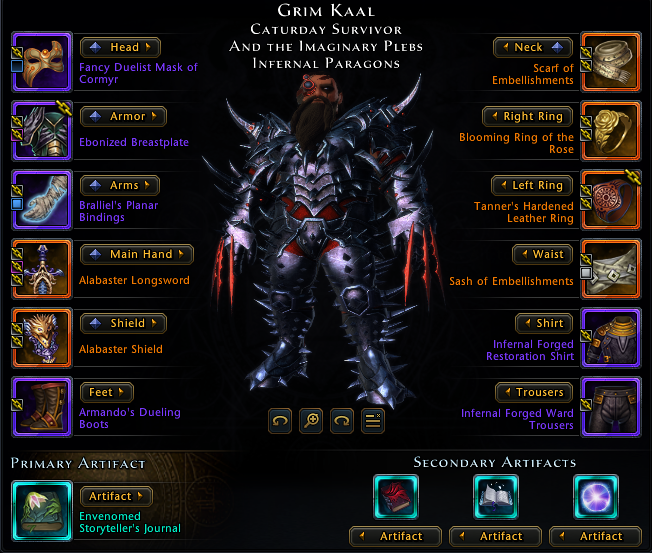 The Tanner’s Ring and the artfiact set from Tales of Old are the only gearpieces I would claim are 100% best in slot for this build. All other pieces can be used to balance stats, but some equip bonuses are clearly better than others. In the barbarian/paladin part of this guide, you will see alternative gearing options that will reach the same stat caps.

Tanner’s Ring :
This item makes our dailies hit harder as our max hit points increases. At my ilvl, I hit for about 380k when activating Second Wind. 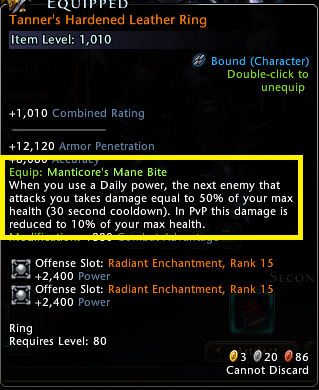 Fancy Duelist Mask of Cormyr :
I choose to use this headpiece, as the only time I seem to slow down in combat is versus the last mob standing. +5000 power helps solve that problem.

Bralliel’s Planar Bindings :
I enjoy using this because it grants me Combat Advantage and +5000 power for the first 15 seconds of a fight. 15 sec is more than enough to kill everything in sight 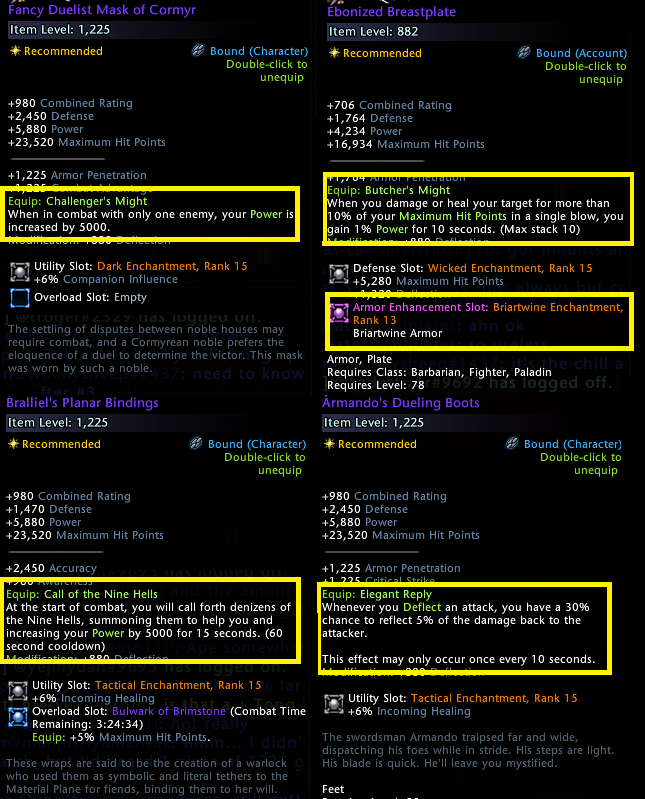 I use the Briartwine armor enchantment for ALL content. The reason to use the briartwine is simple ; the reflect part of the enchantment is NOT affected by the 10 sec cooldown mentioned in its description, and all damage reflected by the briartwine is counted as a player hitting the enemy. This means the briartwine will activate on-hit effects like the tenebrous enchant and the baby owlbears prescense when taking hits. The briartwine reflect damage has a 0% chance to crit, making this a very good trigger for the owlbear. 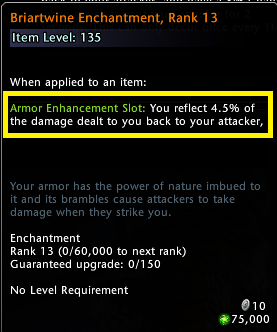 Weapon enchantments I swap between Lightning in my Alabaster set for AOE combat and Bronzewood (in party) or Vorpal (solo) in Burnished set for single target fights. 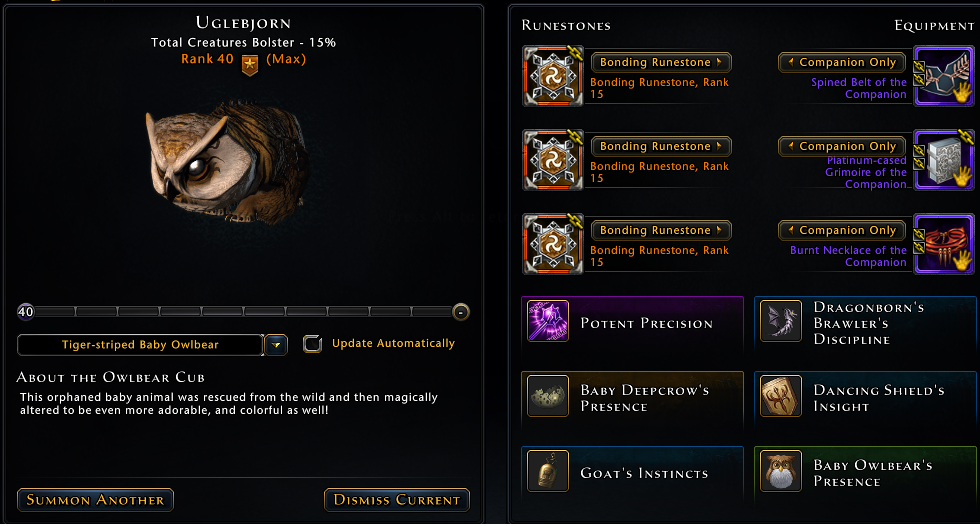 As for companions, you can mix and match as you see fit. I have loadouts for active Owlbear Cub, Deepcrow Hatchling and Bulette Pup.
The Owlbear Cub is the only companion that is 100% needed to make the build work, all other companion slots can be used to fill stat gaps as you progress towards perfection.
I aim to have a much +power and +HP possible from companions when at stat caps.
In the barbarian/paladin section, you can see other companion setups reaching the same stat goals. 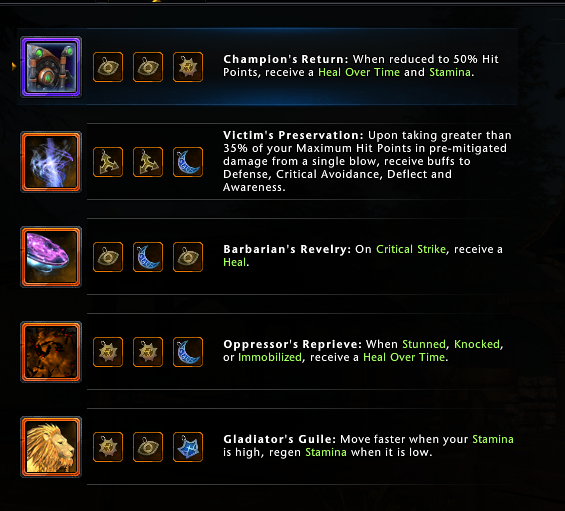 I have 2 prefered mount combat powers, depending on situation ; The Tensers Transformation (for solo and AOE combat) and the Swarm for single target fights.

When it comes to mount equip power, I like having +power and +HP to choose between depending on situation.

- Bull Charge
- Linebreaker
- Shield Slam
- I consider the TAB-mechanic Dig In our 4th encounter as it hits really hard, and has a 10 sec cooldown. I just tap TAB in fight just long enough to get the Retaliate procc. Practice to find for how long, its possible to procc before your sheild gets the red animation. Many fighters tend to forget about this hard-hitting ability.

- Cleaving Bull and Shake It Off the only feats really needed, others can be changed to fit playstyle.

- Bull Charge
- Knee Breaker
- Anvil of Doom
- I consider the TAB-mechanic Dig In our 4th encounter as it hits really hard, and has a 10 sec cooldown. I just tap TAB in fight just long enough to get the Retaliate procc. Practice to find for how long, its possible to procc before your sheild gets the red animation. Many fighters tend to forget about this hard-hitting ability.

- Second Wind (The ONLY daily in use, as this both heals you to max and deals a lot of dmg to single target due to Tanner’s Ring)

Cleaving Bull and Shake It Off the only feats really needed, others can be changed to fit playstyle.

Like @rjc9000 pointed out, the guide lacks a proper cape recommendation. This build is best enjoyed wearing the Cape of Catastrophy.