adinosii Member, NW M9 Playtest Posts: 4,294 Arc User
August 2020 edited August 2020 in Player Feedback (PC)
The divine armor is not yet available, but I suspect it will either be available with a later Milestone, or maybe those armor pieces are related to the hunts - maybe you can buy the pieces for some hunt trophies. 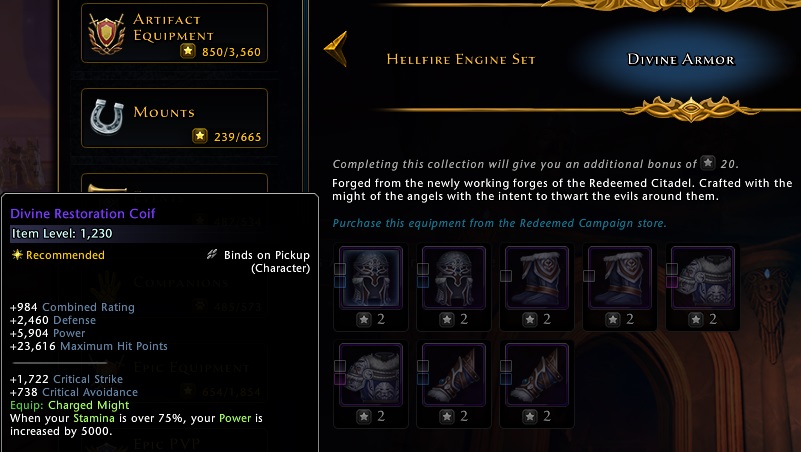 My complaint is that the armor peoeces are uniformly disappointing. All of them are just slightly reduced versions of the Lionheart armor. This means there are ZERO reasons for anyone who has the "good" Lionheart pieces to go after any of those items.... the stat allocation is the same and the bonuses are the same.

I know the goal is to remove all build flexibility and make everyone pretty much the same, but personally I find that approach boring, and it has taken a lot of the fun out of the game.

There is a number of different bonuses, so why could the Divine Armor pieces have a different set of bonuses than the Lionheart pieces? That might have made some of them possibly a viable option for players with Lionheart gear.

Sure, some of the items (like the head gear) is probably a good upgrade for people who have not yet reached the stage where they can farm the Lionheart gear, but a wider appeal would have been nice.

Also....now "hybrid" builds are not really feasible any more and people are "pigeonholed" into a strict DPS/Tank/Heal role, it would be kind of natural to provide players with armor pieces suitable for each of those roles....but quite frankly, some of the armor pieces look like nobody has bothered to ask "Which items are sititable for each of the three roles?"
Hoping for improvements...
4
Sign In or Register to comment.
Powered by Vanilla