nightside
nightside#8350
Member Posts: 10 Arc User
September 2019 edited September 2019 in Builds, Powers, and Game Mechanics
Telekinesis is bad... really really bad. Converting its numerical effects in the game is terrible, but it doesn't have to be.
I understand some people don't like psionics in Star Trek. That's cool. Some people do. Like Time Travel, Psionics has a special place in a limited number of movies and episodes scattered across Star Trek. 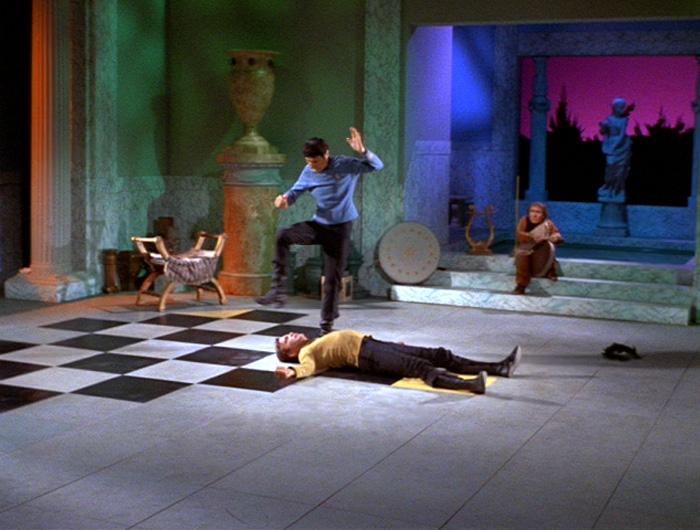 In Star Trek: Plato's Stepchildren, a couple of things happened. For one thing, Telekinesis was used to do something besides sending enemies flying across the room. Like forcing enemies to fight or dance.Some alien PVE enemies can levitate your character in the air and suspending them there for a few seconds. Other possibilities exist. You could fling someone up in the air and drop them, or fling them into a wall, or paralyze-crush them. Lots of options.
As to the episode, another important consideration is that the human crew managed to synthesize an injection that granted the power to the crew, implying it was an optional ability. In Next Generation, the doctor discovered psionic children with telepathy and telekinesis (and overactive immune systems that rapidly aged people)

Diana Troy is a consistent Bridge Officer in Next Generation who uses her empathic and telepathic abilities even across the reaches of space to calculate strategic advantages, like detecting lies, possibly detecting cloaked ships, or creating an innocuous aura near some giant living space creature. These are classic options.

But let's talk about the notion of a Specialization Psionic Tree. With a Tree, you don't have to worry about the balance of a single power because you can simply chain out the better powers and split them up between Space and Ground, knowing any option taken has an opportunity cost from some other desirable specialization. Speaking of Space, you are probably wondering how Psionics could possibly have any impact on the Ship level. 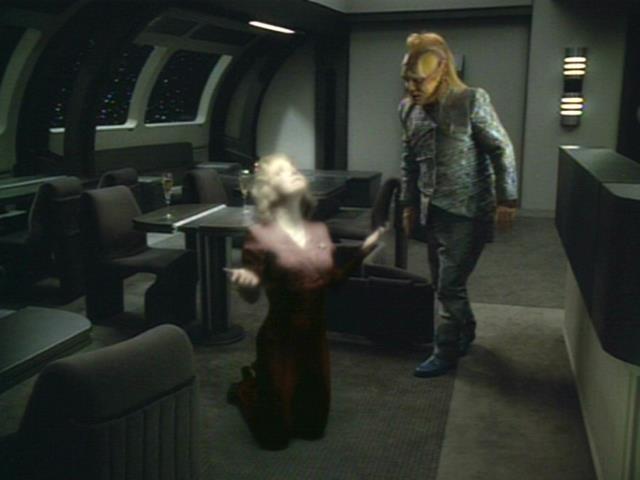 In Star Trek Voyager: The Gift, Kes before ascending to a higher psionic being, grants Voyager a Gift - she sends the Ship 9500 lightyears closer to home. This effect on a Space/Ship scale of a Tree would be comparable to a limited use Transwarp or Slipstream Burst, and would be an appropriate ability for the final tier of the specialization, locking it out for secondaries. Hurling an enemy ship is a more combat functional space ability, essentially space knockback, something like 3-12 kilometers (ship scale) with a several minute timer, possibly inflicting "gravitic" physical damage. You could even have two tiers of it, two separate powers: One that Hurls a ship safely but far, and One that hurls/violently shakes a ship causing damage. I would recommend the Slipstream/Transwarp ability on Sector Space be the prize at the end of this list, and having a 15-60 minute countdown timer to reflect how rare it is. Space ranges appear to be 10 kilometers for every 30 meters of ground, and two different damage curves that overlap somewhere, but its saying 81:1 damage for Space:Ground for TK. Other powers obviously exist, even if you only stick with the Canon of Trek itself. Wesley Crusher demonstrates some interesting abilities related to ships, phasing, and travel. When Kes was training, there was a moment with Tuvok where she burned him badly with Pyrokinesis. Pyrokinesis could be a significant source of Damage, if you think of standard Telekinesis as the very first and weakest power in this Tree, Pyrokinesis would be the "plasma damage" avenue of abilities, Ground or Space. Other "Kinesis" offshoots exist if you are looking for more boxes to fill: Cryokinesis (cold) and Electrokinesis for example. There's already a few graphics for rare Electrical weapons. As to Cryokinesis, it could be a Popular Quest among Remans on Ice Moons, but most useful to STO might be bonus damage vs. Tholians who are particularly vulnerable to the cold and prefer hot climates.
The Dielectric Oscillation Personal Shield has "Cryokinetic Dispersal" as an effect, dealing 33.1 cold damage (50% shield penetration) and -66^ Run Speed for 3 seconds. This implies "cryokinesis" is already a programmed effect. Slotting it onto a Skill Tree, or a Reputation Story Arc would work fine. Whether Psychokinesis is a Specialization, or a Reputation System, either allows a potential where telekinesis isn't awful.


Levitation could be another possibility adding temporary mobility, perhaps 15-30 seconds worth. How would this impact the game? Some parts of the STO maps have glitchy traps, or places where you can fall down, but can't get back up. Having a levitate ability that refreshes once a minute might allow you to get unstuck like I was this morning (and had to transport out ruining my mission progress). There was another map where you had to jump up and click repeatedly until it triggered a scene. With a levitate feature, you could just levitate up, then click. I was once trapped between a pair of tall rocks on New Romulus. Some of you have already experienced being stuck, so you can probably understand how even a few seconds of levitation could fix problems, even if it provides little or no combat advantage.

Telekinetic Barriers and various other alien defenses are many. There's a lot of options.

How Bad is Telekinesis?
But... just how bad is telekinesis in this game? At my level, Telekinesis inflicts 31.8 damage once per minute, for a total of 0.52 - that's ZERO-POINT five-two DPS. By way of comparison, Rifle butt inflicts 65 damage 80 times per minute, for 86.7 DPS, making a Rifle Butt technique 166 times better than Telekinesis. Even my low level Klingon Commander does 21 DPS unarmed, which is still 40 times better than Telekinesis from a high level admiral. A trait like Assault Training or Aggressive will grant 5% additional damage on every hit for every attack in a given minute. My low level Klingon has about 106-112 DPS unmodified by other traits or criticals, even a level 1 generic quality disrupter is 84 DPS... which means +252 damage/minute is inflicted by either of those traits even at level 1, and about +360 damage/minute or more for high level characters.Translation? Telekinesis is about 8-10 times worse than any of these traits. There's a trait like telekinesis you can take that gives you +1 photonic ship. Last battle i was in one of my photonic ships did a critical on a borg with a quantum torpedo for 73,000 damage. This is the possibility with one genetic resequencing. Why not telekinesis? Even if you adjust for the 1:81 or so damage factor from ground to space, that's still like a 900 damage critical attack on the ground. Why does TK suck so bad? Why not fix it? Half a Damage point per second is just not right.

In terms of gimmicks, Telekinesis could be used to "fetch" an object like when you kill an alien and a floating loot container appears, telekinesis could save you time by letting you extend your "click range", but doesn't. An emote of you levitating or juggling objects could exist, based on those Doff Missions for Entertainment (perhaps a mini game quest?) but doesn't. There are Doff missions implying various uses for Telekinesis, but none of these are actually used for TK players. TK can be acquired with genetic re-sequencing, and could be awarded via a story arc or one shot purple doff. It could be a window to Awesome...