starswordc Member Posts: 10,944 Arc User
April 2019 in The Foundry for Star Trek Online - Mission Database
So, apart from my sole published mission "Bait and Switch", I had three projects in the pipeline I was working on off and on when the sunset was announced. I decided to go ahead and publish them despite their woefully incomplete state.

Please go ahead, play and review. All are written for Feds, although I was working on including Romulan dialogue options in "Emendatio Erratarum Veterum" and Cardassian options in "The Hydra's Head".
I'm going to go through each of them, film them, and upload the videos to my YouTube channel, "StarSword C".
"Great War! / And I cannot take more! / Great tour! / I keep on marching on / I play the great score / There will be no encore / Great War! / The War to End All Wars"
— Sabaton, "Great War" 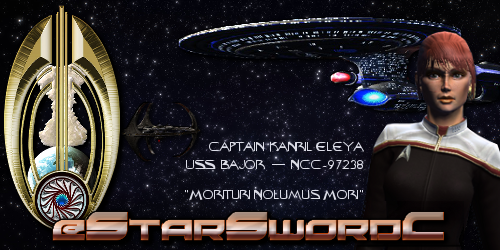