xgnxlentgamer02 Member Posts: 74 Arc User
April 2018 edited April 2018 in Star Trek Online General Discussion
Hey guys! I'm Ren, a Lifetime Veteran for Star Trek Online. Recently, I've began playing more Star Trek Online since I stopped around the beginning of the year. I'm here to discuss a suggestion I have. The suggestion I have is to add jetpacks to the game. I started thinking about this around Summer 2017, mainly because of how much fun I was having on Risa with the floater. Before I begin, I'd like to establish that this is just a rough outline of my idea.
First off, I'd like to discuss how much it would cost. Since it's obviously going to be a rather overpowered item, there would be 2 ways to earn it. The first way is to spend 1,000 Zen on the jetpack in one of these categories: Legacy Unlocks, Items, or Promotions. The second way is to earn 100,000 Dilithium and purchase it through the Dilithium Store.
Second, I'm going to talk about the functionality and stats on the jetpack. The jetpack would be an epic quality item with a flight speed of +50. It would have superior flight maneuverability as well. It's pretty much just a remake of the Risan Floater, but with a few differences. The differences would be that you can actually fire your weapons while in the air. Having the jetpack would also reduce your accuracy, but increase your range from 10 meters to 20 meters. It would be the same for the attacker. Melee weapons would of course be rendered disabled while in flight. It would also have the same recharge time as the Risan Floater, but it would activate faster. Since the jetpack would be so overpowered, here's the way I would plan to limit it. The jetpack would have a limited altitude range, only being able to ascend maybe 30 meters above the ground. Also, if the user's health drops below 25%, the jetpack will become inoperable, dropping the user out of the sky.
Finally, I'd like to talk about how it would look. I was also inspired by the Mandalorians from Star Wars for this whole idea. Starfleet, Klingons, and Romulans would all have their own jetpack designs. There would also be multiple kinds of jetpacks like the Risan Floaters. You could buy them in different colors and patterns. Here are the base designs for the jetpacks.
Federation: 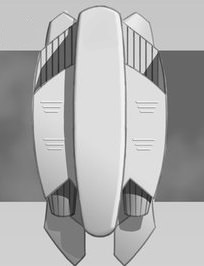 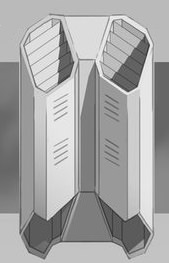 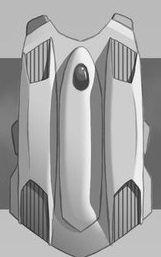 Lastly, instead of having the effects of the Risan Floaters, they'd have blue plasma coming out of the thrusters. Thank you for taking time out of your busy schedule to read this! I hope this gets into the game!