heero200 🇭elper 🇪xtraordinary 🐲💯Posts: 4,408 Community Moderator
October 2018 edited October 2018 in General Discussion
Please Feel Free to Update If needs Be. Please note this is not the Official Info and as such you should keep checking for updates. This post should only be used as a reminder for standard Maint Times and info.
Server Status Provided By @nrglg (Reload Page To Update) 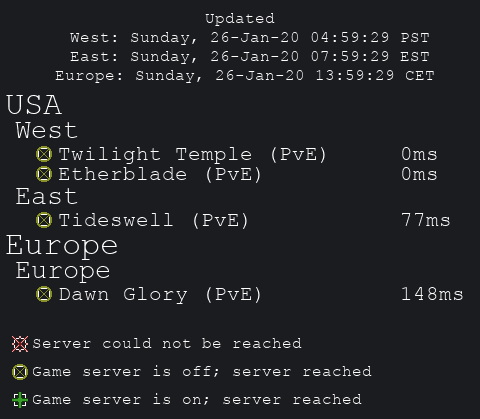 If their is maintenance tonight expect it to be the usual time unless any updates, from 11pm to 2am PDT.

Maintenance is expected to last approximately 4 hours, so during that time you will not be able to access the live servers.
*Maintenance times are tentative and are subject to change at any time. Actual end times will vary depending on the progress of the maintenance.

Thank you for your patience and we apologize for the inconvenience.

Todays question.
What is your favorite place to chill in PW and why?


Short and sweet today. Please note other maints this week as well such as ti and eu DST maint.