"The bad news keeps piling up, we just lost the Buran" said Captain Ash Dawson.
"Survivors?" asked Reyes.
"Only the captain, the coward should have gone down with his ship and crew" answered Ash.
"You're not the only one airing that sentiment" replied Reyes.
"Good to know my first officer understands" answered Ash.
"I don't like it out here" replied Reyes.

Reyes left the ready room and took up his station on the bridge of the Monroe, she was an old Walker Class but she had character. As she approached the Betazed homeworld and jumped out of warp, four Klingon Birds of Prey decloaked and opened fire,
"Captain to the bridge" said Reyes via com terminal.
"Number One, what have we got?" asked Ash.
"Four Klingon Birds of Prey, they decloaked as soon as we warped in and fired" answered Reyes.
"Lt. Denvar, keep us between the Klingons and the planet, nothing gets past us" ordered Ash,
"Klingons matching course and speed, two have peeled off to engage our six" reported Lt.Cmdr Barnes.
"Divert reserve power to rear shields, be ready to fire when they get within range" ordered Ash.
"Enemy Birds of Prey converging on our six from above and below. They're weaving to avoid our sensors" reported Barnes.
"Fire manual, best guess" ordered Reyes.
"Firing" reported Barnes as one Bird of Prey exploded after taking torpedo hits to the bridge and reactor knocking out the warp drive of the other.
"One destroyed, other is stuck at impulse speed" reported Barnes.

The Monroe then shuddered as a volley of torpedoes hit the ship's upper deck,
"Attack Pattern Omega I, don't give them a clean shot" ordered Ash to Denver.
"Attack Pattern Omega I engaged" reported Denver.
"The other two Birds of Prey are moving in, we've taken damage to our warp drive. Shields are beginning to buckle with hull breaches on decks 2, 4,5, and 9" reported Cmdr. Hwake.
"Then we fight to the bitter end, the best advice would be to retreat and lick our wounds but we know Betazed won't have that luxury. Retreat?! Hell we just got here" said Ash to the crew.
"We're with you" answered Reyes.
"Let's do our duty as Starfleet officers" replied Ash.
"Yes sir!!" chorused the crew.
"Distance of forward weapons on target?" asked Ash.

"Enemy in range" answered Barnes.
"Let's use their invisibility screens against them, since they cannot fire through them, they are vulnerable" said Ash.
"If that is the case for weapons, what about shields?" asked Barnes.
"Then we need to force them out of cloak, as they decloak, their shields will be down. Barnes, I need a well timed torpedo spread. Hwake, can you forge this ship getting disabled?" asked Ash.
"I can make it convincing" answered Hwake.
"Do it, we want the Klingon to decloak, when they decloak, their "helpless" prey will have a nasty surprise for them" replied Ash.
"Let's see what happens when we turn their ambush into our ambush" answered Reyes.
"Ladies and Gentlemen, let's get to it" ordered Ash.

The Monroe now began to suddenly drift as power levels dropped to all but the most essentional, when the three Birds of Prey moved into investigate, the Monroe sprung her trap, as a spread of torpedoes destroyed two of the Birds of prey, the last Bird of Prey fired before she made her retreat, the shot was fatal, the Monroe had been hit in the shuttlebay as internal explosions ripped through. After the damage control teams had managed to assess the damage, the Monroe was doomed and trapped in Betazed's gravity.

Faced with no choice but to crash,
Ash ordered "All hands brace for impact". 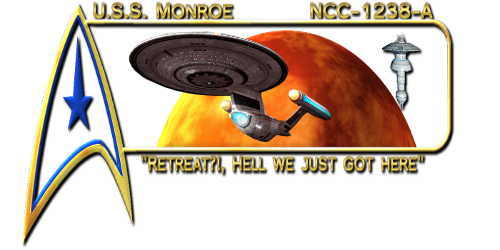 "The meaning of victory is not to merely defeat your enemy but to destroy him, to completely eradicate him from living memory, to leave no remnant of his endeavours, to crush utterly his achievement and remove from all record his every trace of existence. From that defeat no enemy can ever recover. That is the meaning of victory."
-Lord Commander Solar Macharius
0