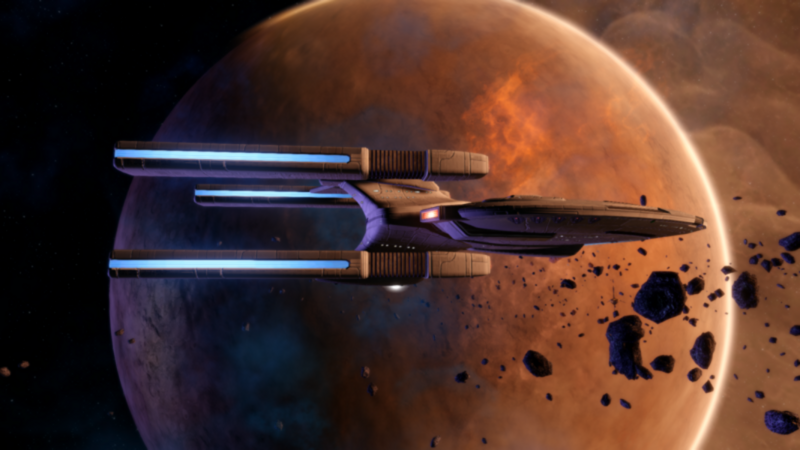 The USS Ardeen has been assigned to explore ruins on a world near the outer most edges of the border between the Federation and Klingon Empire. Tensions are running high within the Empire, and some in Starfleet believe war is inevitable should Chancellor J’mpok stick to his claim on the Hromi Cluster.

The world we’ve been assigned to investigate, Verbis II, is very near the border of the Hromi Cluster, and Starfleet is worried should hostilities break out, then Verbis II would like be needed as a forward base. In that case, it is important to catalog the ruins of a long forgotten civilization should the Klingons decide to claim it, and pulverize the ruins in favor of troop housing and ship building facilities.

While Starfleet’s mission is exploration, I must confess to no small amount of trepidation of being this close to Klingon space without at least a task force. My first officer, on the other hand, couldn’t be more excited to be here.

Captain Matt Jerrickson finished entering his log and straightened his red uniform tunic. He’d always preferred the more subdued black and grey uniform with departmental color accents from the Dominion War, rather than the latest variant Starfleet was calling the “Sierra uniform”. It was a call back to a time before the Dominion War when Starfleet was an exploration organization. Matt couldn’t argue with being an explorer. It was what drew him into space, after all. Still, his own preference for more uniformity clashed with the more “in your face” color scheme of the Sierra variant. He privately hoped for a return to a more subdued look, and thanked the universe he no longer had to wear the all too form fitting variant that preceded the Sierra. He looked up from his uniform critique as his door chime sounded and called out, “Enter.”

His Betazoid first officer stepped just inside the door to her Captain’s austere quarters. “Captain, we just entered standard orbit. Full surface scans underway.” Commander Kori Udul stood just inside the entrance to her Captain’s quarters with her hands behind her back. Unlike the majority of Betazoids, Udul was...fierce was the best word that always came to Matt’s mind. She kept her raven hair pulled back in a tight updo with a few strands purposefully hanging down to disarm those who thought her too stern. Her obsidian eyes always seemed to TRIBBLE back and forth, looking for the next threat around the corner. Although her presence and empathetic abilities often put some of the crew ill at ease when she was handling discipline, Matt had come to rely on Udul’s precise rigidity to maintain order.

When off duty, or away from the crew, Matt had found a confidant with whom he could discuss concerns or doubts about his command decisions. Her mind was as much of a steel trap as his, and despite some concern from her former COs as being too cold or distant, Matt had seen a kindred spirit when reviewing her record for a new XO after his former First Officer, Rhys Llywarch, was promoted and given command of the Hartford.

“Thank you, Commander. Coming to the Captain’s Mess for dinner with the Command Staff?” He could see her visibly preparing an excuse, so he interjected before she could vocalize it, “We both agreed this helps morale.”

Udul’s jaw worked as Matt saw her fighting back her frustration. “Yes, Captain. It’s just a little overwhelming at times.”

Matt nodded, and tried to soften his tone and his face. He knew Udul didn’t like to use her empathetic abilities unless absolutely necessary. “I know, but the counselor said you needed to engage more. You are the best officer I’ve had the pleasure of serving with, and while your dedication to duty is unmatched, if you want to command a starship one day, you need to connect with people in a meaningful way.”

Udul rolled her eyes in a mocking fashion that she only showed to Matt when they were not in front of the crew. “Fine. Are you sure you didn’t miss your calling as a ship’s counselor?”

Matt chuckled a bit. “Maybe in another life,” he said, stretching out his back, and running his hands through his slightly greying hair. “What’s the status of the Away Teams?”

Udul nodded at the welcome change of topic. “Six teams standing by, sir. I’ve selected the six sites from the survey reports you sent from the Federation Council. Hard to believe no one has been out here since the late twenty-third century.”

Matt shrugged. “There have been a few archaeological teams over the years, but no one has really found too much to be that interesting. We don’t know anything about the civilization that was here, and the surface seems to have been scorched by some type of ancient weaponry. While fascinating, Starfleet wants us to evaluate the planet for a potential base should the Klingons come calling. If we can discover anything while we are here, so much the better, but the priority is securing the area.”

“Understood, Captain. Anything else?”

“I believe we have an Astro-Archaeologist onboard?”

Udul nodded. “Lieutenant Franklin, yes sir. Specialist in ancient cultures, linguistics, anthropology, and geology. He also specialized is meteorological studies, and has extensive survival training for non-temperate climates marching those of the world below. Excellent choice, Captain. I took the liberty of informing him to be prepared for the assignment. “

Matt nodded, impressed with her near instant recall of information about the crew. He knew several Captains would would be put off by a First Officer taking such liberties, but Matt appreciated her minute attention to detail. “Very good. Put him in charge of the survey teams, but don’t let him get too carried away.”

I’ll see to it, Captain,” she said with a curt nod.

Lieutenant Dexter Franklin grabbed a handful of dirt and let it slip through his fingers as he read the tricorder report then tugged at the collar of his blue tunic, and unzipped it a bit to let out some of the sweltering heat. No matter how many attempts Starfleet made at making uniforms able to withstand the multitude of ecosystems encountered in travels, there was always the one planet that defied those attempts. Verbis II was just such a world.

He tried to focus on his work and less on the punishing afternoon sun. “Whatever happened here, it was thousands of years ago. The trace amounts of radiation in the soil date back around ten thousand years. I’m detecting some elements to suggest there was definitely a thriving ecosystem, and the radiation is definitely not naturally occurring. I concur with other survey teams that whatever happened here was the result of either an industrial accident, or war.”

Commander Kori Udul twirled a dead tree branch in her hand as she looked out over the cliff to the ruins of a long dead city. “Not a natural disaster like an asteroid?”

Franklin shook his head. “No impact craters to match the age or size that would cause this much devastation.”

The arid landscape had a red hue to it that reminded Franklin of the survival training he took on Mars. As an Astro-archaeologist, he loved exploring new ecosystems, but the mission here was not really one of exploration. Starfleet was location scouting in case the Klingons came calling. He found himself staring off into the distance thinking about his and Richard’s daughter just coming of age to join Starfleet, and was eager to follow in her father’s footsteps, but what type of galaxy was she going to serve? A galaxy at war? Or one at peace as he had done after the end of the Dominion War?

“Something, Franklin?” Franklin started at the sound of Commander Udul’s sharp tone.

Commander Udul was standing next to him with an inquisitive look. “Sorry, Commander,” he said wiping the sweat from his dark skinned face. “I guess the heat is getting to me.”

“I see. Why don’t you head to the cooling station and log your findings for the Captain? He’ll want to know about your thoughts on long term exposure to this radiation.”

“Yes, Commander,” Franklin said as he stood slowly and swooned a bit from what would have been a nice bout of heat exhaustion if the Commander hadn’t broken up his thoughts. He nodded his thanks to Commander Udul as she caught him on the arm to steady him. “You think Captain’s right about the Klingons? Will there be war.”

Udul looked back to the ruins, as if she was looking at the future of some other unlucky world. “The Captain has his finger on the pulse of the politics. He likes to be prepared, so let’s make sure we are. You go rest and file your findings. I’ll report to the Captain.”

The bridge of the Ardeen had low buzz of activity as reports from all away teams began to come in from various officers. Matt Jerrickson read through various geological and climatological reports. All seemed to support a favorable, if a bit uncomfortable, environment for an outpost. Perhaps some weather control stations from Risa would help calm the temperatures in time, but the Starfleet Corps of Engineers could have climate controlled some up in no time, and in time of war, Matt was sure a modular dome approach would be much more favorable.

Matt sat down his PADD on the arm of his chair. “Put her on, Mister Heghtay.” The image of a clearly very hot and uncomfortable Kori Udul appeared on the main view screen from an angle of him looking into a PADD. “How’s the weather, Commander. Readings say it’s close to 47 C down there.”

“It’s a dry heat, Captain.” Udul’s cheeks were very pink and blotchy from the heat and sun. “Definitely going to need an environment dome if we set up camp here. Not much else to report the other survey teams haven’t already...” Udul looked to the side, and then the image got all blurry and jerky as Matt could see brief glimpses of Kori running. “Franklin!” The PADD hit the ground, and the bridge could only see the sky.

“Commander, what’s going on down there?”

Dexter Franklin sat down in the middle of the cooling fans at the away team beam down site and let out a sigh of relief. He didn’t realize how overheated he was. One of the medics, a young Bajoran woman named Dares Fashana, handed him a water pack as she held up a hypo spray. “This will help you with the muscle tension.”

He let out a sigh of relief. “Thanks, Fashana. You and Jack coming to the Captain’s Mess tonight?”

The Bajoran sighed. “Actually, it will likely just be me.”

“Are you two fighting again? Please tell me it wasn’t about...”

“He turned me on to the sport when the Captain invited us to the galley to watch. I went with the underdog, as humans say.”

Dexter shook his head and laughed. “You went with South Carolina, didn’t you?”

She shrugged. “I’m Bajoran. We believe in the underdog winning, and they did. Soundly.”

“You know how passionate Jack is about Clemson.”

Fashana opened her mouth to speak, but that’s when Dexter’s world went dark and down became up.
Post edited by rhazedurile on February 13