badnickname
badnickname#3262
Member Posts: 46 Arc User
June 22 in Player Feedback (PC)
I would like to talk about [Chromatic Elemental Strand] drop rate.
As we know, Elemental Strands have drop limited by 30 second cooldown. I found it annoying when I’m getting Chromatic strands few times in a row, because I selected specific location to farm one kind of strands that I need. Besides, we have plenty guilds with lvl 20 and all maxed structures. For players in such guilds these strands have no big value. There is also a group of people without guild who don’t want to be in any guild for some reasons. In this case this is obsolete value for them. I have two propositions and I would like to know what do you think about it.

Make Chromatic strands exchangeable to any other type of strand. The description says it has essence of all dragons, so why not exchange it for type I need. 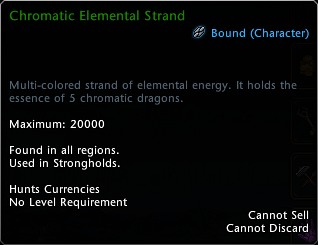 There is already proper NPC.
Of course, would be still possible to donate it to mimic.
Tagged:
1