dracory1#6808 Member Posts: 112 Arc User
October 2020 in Player Feedback (PC)
Right, so before people think I am one of those people who want old 50% critical severity vorpal. No. This is about the underdogs of enchantments.
There are 12 weapon enchantments total in the game, all have their functionality. The baseline nowadays is: Noticed something? That's only 6 out of 12 enchants. Where are the others? Well, let me compare. 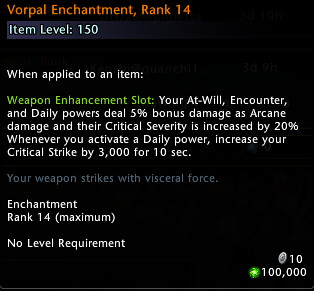 This is vorpal. It's fine for all classes, better for some DPS, worse for the other. Balanced, simple. Not much to say here. 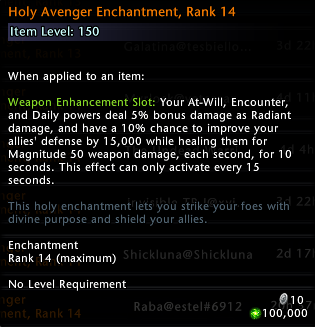 Holy Avenger. It's healer only, but it seems a bit weak for some healers. For paladins it is often a very good choice. Overall balanced, no idea if it should be changed. 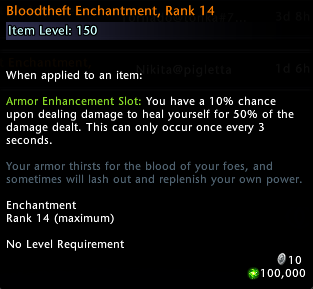 Bloodtheft. Pocket health stone for those who solo dungeons and don't want to use potions. No need to touch it right now, maybe in PvP it should give 10% rather than 50% but I have yet to see someone run it there. 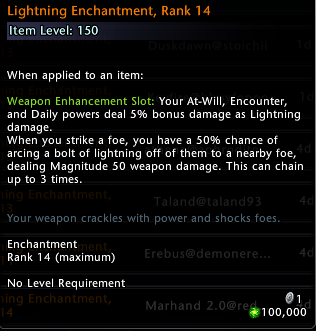 Lightning. AoE for DPS, aggro keeper for a tank. Seems fine to me.

And now let's get to the other enchants. I will start with bronzewood. 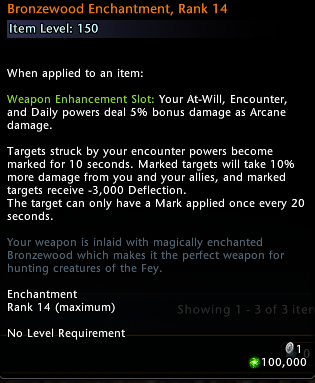 Okay, doesn't seem bad. In a trial with 2 tanks can have almost 100% upkeep time.

Now let's take a look at this. Feytouched. 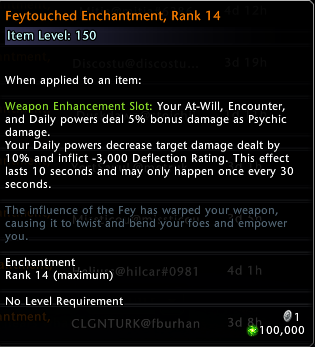 10% damage reduction is not bad, but the daily requirement puts it far behind preferable enchants for a tank.
In my opinion, to make it a viable choice it should be giving out the same effect as bronzewood, just with damage dealt reduction on an enemy. It certainly would not break the current meta and possibly make it a bit more variable.

That would be for Bronzewood-type enchants.
Now the real fun begins. 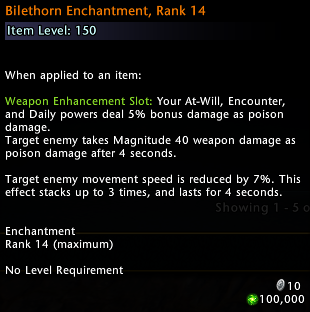 Bilethorn. The unchanging meta for all the DPS who hit fast enough to cover their entire screen in numbers on a single monster, making it look like as if someone turned on damage floaters of a barbarian, rogue and a warlock in the Infernal Citadel after tank pulled all the monsters into one spot. Jokes aside, it is fairly powerful but balances out with Vorpal - some DPS still prefer the Vorpal over Bilethorn for a reason.

But then we have 3 enchants that fall behind... 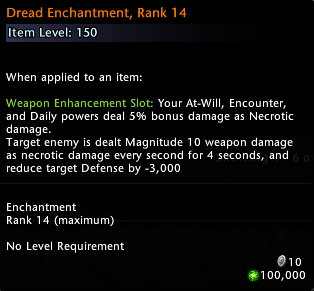 Dread. It has no special effect. It's simply 10 bonus magnitude every second. With how bilethorn currently works, it's 40 magnitude per second due to upkeep time and stacks. My suggestion? Make it stack up to 4 times and give it a unique control effect. I wouldn't recommend anything that disables unless it's once every 20 seconds for up to 3 seconds. 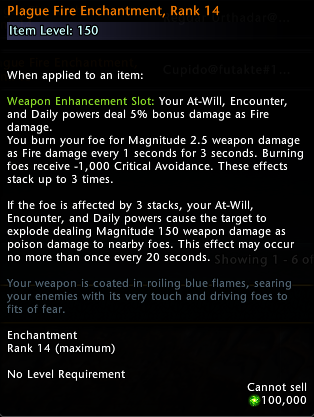 Plague Fire. It's simply disappointing. 7.5 magnitude every second plus 150 magnitude every 20 seconds - Bilethorn does 160 in 4 seconds. It falls behind for 500 magnitude on bilethorn. Sure, the AoE effect is nice but it's not enough. Before suggesting anything further though... 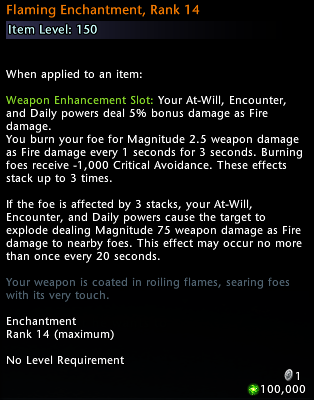 Flaming. What in the world? Same effect but the burst is halved? Come on.
Suggestion to make both similar yet different and viable:
On Plague Fire the explosion should be stronger, hitting for 300 magnitude every 10 seconds and DoT damage upped to 3 magnitude per stack. This could make Plague Fire a viable choice along with Vorpal.
Now Flaming. Just like before, 3 magnitude per stack. Explosions being upped to 150 magnitude and having an additional effect of 75 magnitude DoT on all affected enemies every second for 4 seconds with the first DoT proccing a second after the initial 150 magnitude burst with a cooldown of 15 seconds.

Comparison:
Bilethorn and Dread would be basically the same though Dread would deal damage in stacks rather than single hits. Both would be in line.
Over one minute, simplifying, the damage total would depend on crits but going by magnitude it's .
Plague Fire and Flaming with their new changes would barely fall behind with 2340 magnitude count total but build up over next minute to possibly outshine the rivaling Bilethorn and Dread.

And lastly... I am not even sure what purpose those serve? PvP joke builds?
I will start with this one since that's easier to fix. 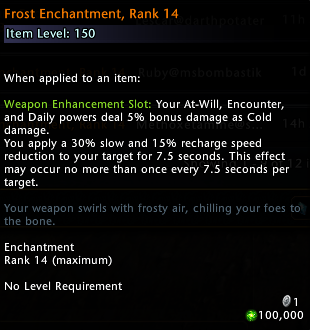 Frost. It's literally Bilethorn but without damage. In my opinion it the slowness effect plus recharge penalty is fine, but for the sake of loving god - do add damage similar to Bilethron on at-wills.

And something that blew my mind when I saw it: 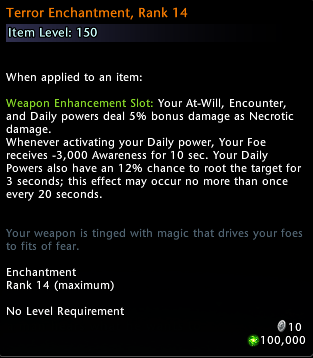 How did this get a pass? The root effect is only 12% on daily power. Currently I can use daily power every 20 seconds if I use Alliance Battle Horn, 2x Greater Corrupt and Envenomed Journal at once. For rangers to be more annoying in PvP than they already are it could work if it was not 12% at rank 14! That's still over every 8th daily you will use! Not to mention that it's useless in PvE!
I have no idea how to fix this... well, it's garbage. It needs a full on rework with it's root effect and a damage effect or an additional encounter based control effect.

That's it from me for now. I could add in armor enchants but that's a whole different story - almost all need their own rework.
2