dread4moor Member, NW M9 Playtest Posts: 1,154 Arc User
February 2017 in General Discussion (PC)
Despite our crack cocaine-like dependence on Anointed Army, mSVA runs still fail if the skirmish mechanisms are ignored.
The strategy has been posted countless times here and on YouTube. Yet every day SVA runs are hindered by someone who either does not know or care about the mechanics.
Please remind your teammates:
1) Ice (permafrost) is your first priority. Freeing teammates from ice is more important than your personal DPS. Don't assume someone else will do it or the trapped teammate will be saved by AA. Every dead teammate lessens your chance of winning.
2) Stay with your group. Running off alone to take on a mob pack is deadly if hypothermia (red arrows) or Permafrost (ice) land on you.
Then, you must scream for help forcing a teammate to risk their life running over to break the ice or rez you. Just stay close to the pack and this never happens.
3) Take red circles (Hailstorm) away from the group, especially away from the boss. So often a DPS player, in bloodlust, will ignore the red circle and keep blasting away. Selfishly, they realize Hailstorm will not kill them due to AA, so they ignore it.
But Hailstorm hurts your tanks more then they hurt you.
Tanks, especially those protecting the party with Knight's Valor, are hit with multiple times the damage of the selfish culprit. Worse, the hailstorm causes a stun dropping a GF's shield and some OP auras for 1-2 seconds. They still have boss aggro but are now vulnerable thanks to your selfishness.
If Svardborg happens to strike at that moment, you are responsible for killing your own tank. Why should you care? Dead tanks are directly correlated with failed skirmishes.
If, on reading these, you said "yes, yes, I already do that" then please admonish any teammates you witness NOT doing these things. RNGeesus is already cruel to us in SVA. Let's not be cruel to each other. Thanks for considering. 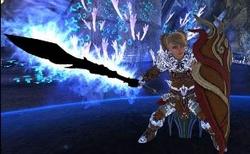