gonzakotwi Member Posts: 267 Arc User
May 2019 edited May 2019 in Bug Reports (PC)
Quest:
- Challenge campaigns does not recognize maze engine daily quests as quests
- Master expedition: beholders have too much hp. Even more than the beholder boss that appears
- Master expedition: Sometimes bosses clip to enviroment. It happened to me that worm didn't come up, the crab clipped to a gate and the werewolf clipped to a wall.

Items:
-Mountaineer set is said to be in the trade bar store but is not there
- Item skill "butchers guard" from new chest pieces does not proc. It should give power when doing certain ammount of damage and it gives nothing
- Artifact activation is cancelled when moving or using another power. It should have higher priority
- AP gain from certain artifact sets is not correct. It should give 4% and it gives much less
- The 'changes if equipped' part of the item tooltip does not display correct values (image attached) 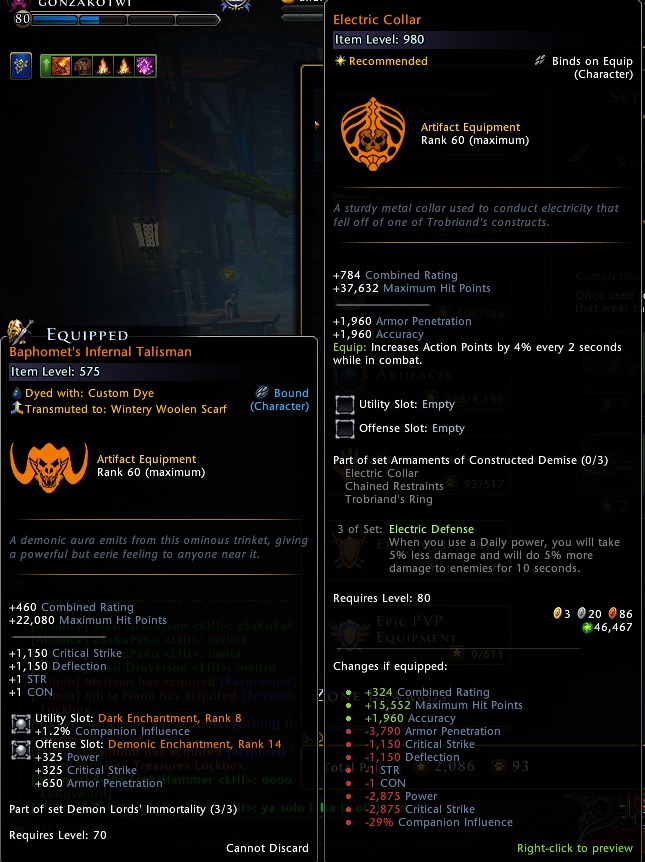 Companions:
- Companions appear in the battle much later (even augment companions). This results in loss of stats in the middle of the fight and turns the striker companions useless

River district:
- Nostura demiplane can not be completed. You can't move when mounted on the stag

Dungeons:
Spellplague caverns:
- Kabal chains damage should be higher. The fight can be passed without breaking the chains.
- Kabal moves and ignites the floor without saying it.
- Kabal sometimes bugs and stands still just speaking
- Kabal big fireball shows no chain attached and it attaches to the closest party member so it is difficult to take it to kabal
- Nostura tentacles have too much hp
- Nostura curse does too much damage. Sometimes it cant be healed and gets the player to die before the paralysis skill
- Last part of nostura need more time to complete. With a 20k party we can't destroy all the blue fires before nostura kills us all.

Fangbreaker:
- Drufi hypothermia does too much damage. It cannot be mitigated with the 5 party members together and results in all of the party dying

Cradle of death god
- Same as fangbreaker, when arrows pointing to a target is better to leave him alone to die

Throne of dwarven gods and prophecy of madness
- It is too hard (i would even say impossible) to complete in gold. we should get more score for every task achieved to reach gold faster.

Kessel retreat:
- On akar kessel fight, kessel spheres and beholders do too much damage (it one shoted my warlock many times with over 200k hp)

Manycoins bank heist:
- Mobs hit too much for the party intended

Castle never
- Zombies on death sphere charge part hit too much. It can be completed but if any zombie turns to hit a player it kills him in one shot.

Lair of the mad mage:
- Mimics are too hard to kill. The rest of the dungeon is much easier than that part.
- The cocoon is bugged. Period
4