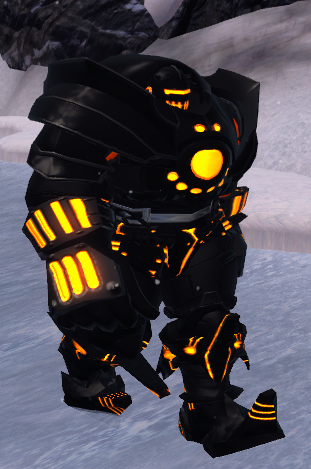 Plot:
*This behemoth hails from mother Russia and slowly making his way to your vicinity crossing over the Barring Strait to get to the America's. The ice kept him frozen since WW2 but know he is free to erase existence as we know it. Foolish enough was the scientist who woke him quickly met their end. He absorbed the oxygen pulling them unto his body where they were grilled sunny side up.
*One of the tankiest characters in verse even if a character can match his resistance it is to risky to hit him hard that could result in a nuclear explosion. How you going to stop him? Besides the radiation heat is to strong to come close to. And he can even absorb and repel certain forms of magic.
*Is the heaviest character with an armor comprised of hot compress matter. A single character should not be able to Lift him alone no matter how strong. Even so if this bastard fall from a great height its game over.
*Is one of the slowest travelling characters. Too heavy to be lifted by air or sea if not magic. His structure makes it difficult to navigate simple obstacles line bridges or mountains. It's easier to blast through obstacles it than to go around or over it.
*Only way to beat him is to cool him down freezing his joints with liquid or cut of his oxygen absorption. The heros must make their way to the snowy north to stop him at his weakest or bye bye birdie.
Post edited by metalheart#4270 on May 1