theravenforce Posts: 6,812 Arc User
September 2017 edited September 2017 in Suggestions Box
So I've recently been messing around with Sorcery and the powers it has, trying to come up with a build I'm fond of. I've had a few rough ideas of some things which could be fun once refined and added to Sorcery to make it a bit more...flexible or fun (in my estimation) outside of DPS or heavy support.

1. Aura of Primal Majesty - Changed to be a Hybrid Passive, with slightly different attributes, which are suited to each role. (Note: I don't know how many rules were waived to create Congress of Selves in the sense that it was no longer limited to support/hybrid role but can be applied in ALL roles, but if this isn't a problem, I think AoPM would be a good candidate for such a thing.) Each version has the basic buff from the standard version (standard version being the Hybrid Role version) but at differing levels.

- Self Stat Buff (Half of that Hybrid Role grants)
- Additional Paranormal Melee Damage Boost (possibly fixed values 20% / 25% / 30%)
- Chance for a Protective Ward (Dodge/Avoidance ratings to be increased to 20% additional dodge & 30% additional avoidance at low health) to apply below 20% HP. Can occur once every 40 seconds when conditions are fulfilled.

- Self Stat Buff (Half of that Hybrid Role grants)
- Additional Paranormal Ranged Damage Boost (possibly fixed values 20% / 25% / 30%)
- Chance for a Protective Ward (Damage Shield - 2500 total damage absorb, shield vanishes once amount is reached or you reach 75% HP) to apply below 20% HP.Can occur once every 40 seconds when conditions are fulfilled.

- Self Stat Buff (Half of that Hybrid Role grants)
- Other Stat Buff (as currently but slightly more potent)
- Chance for an Arcane Disruption (self-rezzes to reset cool down if you die within 15 seconds of having self-rezzed to apply to self). Can occur once every 40 seconds when conditions are fulfilled.

2. Spellcaster Toggle - I'd like to see it use a different and 'cooler' animation than it currently does, as it just uses Manipulator's floaty animation. A good candidate would be the animation sequence you get when accessing a mystic crafting table. So: 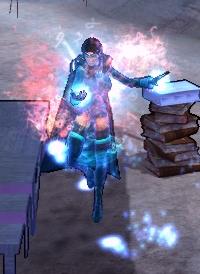 3. Invocation of a Storm Calling - Whilst this is a nice power...I'd like to be able to move whilst casting it, similar to Hurricane.

4. Soul Beam - Would like to see a visually thicker beam of arcane power, as well as an actual description and a new icon.

5. Pillar of Poz - Give this power an advantage which drastically lowers the damage it deals in favour of drastically boosting the potential healing it can deliver. Advantage: Enhanced Rune This could be like...

I'd also like Pillar of Poz to show up on the status / buffs bar when you are affected by its rune, maybe have the Pillar of Poz icon but with a green PLUS sign in the middle of it, similar to what was done to Absorb Heat and Electrical Siphon.

5. Skarn's Bane - This power has been chopped and changed so much. I think Bane should be innate to the power again and applying Hexed at the end of a full maintain should be an advantage. The damage it deals could possibly be upped a little. Maybe increase the range of the power to 60ft and allow "Bane application" to be considered applying a Curse for the purpose of Conjuring.

6. Enchanter Passive - I haven't actually used this passive yet, but it seems a bit bare bones compared to other passives. It feels like it should have some sort of secondary effect, but I'm not entirely sure what that could be, but it does need something I think.