theravenforce Posts: 6,812 Arc User
March 2016 edited March 2018 in Suggestions Box
This is basically a list of suggestions and adjustments that I would make / advocate to be made to the powerset. Naturally this is up for discussion.

With the changes that we are seeing to Blast powers, in terms of them gaining some utility, I've been thinking about the Force Powerset and how outside of knocking things every which way and the failed interaction with effects classed as "Containment Fields" (CF, PFF, PF, FS, MR, HPM, ER & Bastion).

Force could do with a new or alternate mechanic to make it interesting once more. criswolf's thread made me think back to a couple ideas I've had bouncing around my head surrounding the Force set. In addition to criswolf's thread, what really prompted me to post was Spordelia's, quite recent and amazing illustrations for Force Travel Powers (and others) which I have been dying to see in game for ages.

I was actually thinking that with the way "Blast" powers are seeing an increase in utility that something like this could work/ be implemented.

Note: Debuff names and cooldowns are mostly provisional.
Note #2: Please READ each suggestion as some have certain exceptions or special conditions to increase in set attractiveness.

- Innately reduces resistance to Ranged Crushing Damage by 18%. This debuff is called Eaves. (Your Force based attacks have exposed your target to crushing eaves of Force, weakening them for further Ranged Crushing attacks.)
- Damage variance of this power has been reduced.
- This power no longer innately knocks enemies back, but instead applies a strong repel them.

Advantage: Force Manipulation:
- Force Blast now also applies Disruptive Force.
- "Disruptive Force" debuff reduces enemy movement by reducing their ability to move by 30% per stack and causes enemies with close proximity to gravitate towards each other. This stacks to three & has a global cap of 6. Notes: The gravitation part of "Disruptive Force" does not apply to the following enemies, however the movement reduction will:

- Force Blast's advantage "Field Inversion" has been adjusted to "Overwhelming Force". "Overwhelming Force" allows access to the original version of Force Blast which knocks back enemies, but prevents Force Blast from applying "Disruptive Force". (Ideally this would be a zero point advantage and players would just rank up as normal. But this would require a creation of a identical but secondary power which functions differently, so it may have to be a three or Four Point advantage, which grants rank 2 (3pts) or rank 3 (4pts) of the original Force Blast)

- Innately inverts any Containment Field effect surrounding a target (this excludes the Player version of Personal Force Field, but will apply to Containment Field, Protection Field, Field Surge, Mindful Reinforcement, Hardened Particle Matrix, Energy Refraction & Bastion. As well as NPC PFF.)
- This power's innate damage and knock strength have both been lowered by 10% as a trade off for new interactions with in set debuffs.
- This power will now rupture stacks of Disruptive Force for additional damage and knock distance (1.5% per stack).
- Targets who are affected by Eaves debuff and Disruptive Force debuff and have Force Detonation applied to them will have both debuffs removed and suffer from "Compression".
- "Compression" is a DoT, which deals scaling damage to the target as time goes on. The highest amount of damage this DoT can deal will be at the end of the duration (final tick). Lasts for 12 seconds.
- Upon successful 'detonation' of Eaves and Disruptive Force, Force Detonation's recharge is instantly reset. (Similar to Rimefire Burst).

- Increases all of your ranged Physical (Crushing, Piercing, Slashing) damage. This increase scales with your Super Stats.
- Increases your resistance to all Physical Damage and greatly increases your resistance to Crushing and Piercing Damage. These resistances scale with your Super Stats.
- Generates a small amount of Energy when you are struck with Crushing attacks.
- This ability cannot be consumed by Force Cascade. Instead it provides a high cost discount to Force Cascade (comparable to that of an energy form). However once Force Cascade consumes this benefit (on Tap or full charge), the cost discount will go into cooldown for 10 seconds.
- Foes struck by your attacks or who strike you have a 10/20/30% chance to be affected by “Disruptive Force”.


[Note: This next power has been underperforming since Beta and has unfortunately been neglected, but discussed to death on forums by both myself and perhaps more notably, Cyrone. As actual consistent users of this power, we have both discussed it and discussed it with others on forums (quite recently in fact). This version of PFF is sort of an ideal (IMO), which could potentially need certain aspects adjusted based on the perceptions of it's "fixed" presentation below.]

This next power is tricky, mainly because adding too much to this power can make it overpowered, and not adding enough makes it a waste of Development Time. It's been discussed on a poll thread where I gave my opinions alongside everyone else, despite some misinterpretations which arose. The version below is an "ideal" PFF, as I felt none of the options given in that poll were suitable for PFF alone, so I've crafted an ideal based on my previous ideas. The idea is that PFF should be able to stay within healthy shield ranges and should NOT be dependent on high end bubblers / bubbles to function.

- This ability’s shielding strength now scales with your super stats in addition to gaining bonuses from Presence/ Bonus Healing. This scaling is NOT doubled if you super stat Presence.
- Placing Protection Field on a Personal Force Field user will now, in addition to what it already does, increase Personal Force Field's regeneration rate by 0.5 seconds (= basically this means that applying Proc Field to PFF will make the regeneration rate speed up to 1 second).
- Protection Field's base shield amount has been increased slightly.


Force Snap
- Range has been increased to 60ft.
- Activation time has been reduced to 0.5 seconds
- Entropic Collapse Advantage has had an increase in range to 20ft with a 5 target cap (up from 10ft w/ 4 target cap)

Inertial Dampening Field
- Inertial Dampening Field or IDF has been adjusted to become an Active Defensive Ultimate.
- IDF now grants a high absorption and damage resistance effect to all allies within a 35ft radius of the caster.
- VFX spawns a clear bubble effect which should have some level of VFX priority.
- Active Defensive effect lasts for 15 seconds. Has a 2 minutes 30 second cooldown.

- Containment Field now applies to a maximum of 5 targets within an area.
- The protection that this ability's shielding provides to targets has been reduced to 15%.
- Containment Field now also deals crushing damage whilst the shielding effect it grants is still active. (similar to how Grasping Shadows can deal damage but not break the hold)
- Charge time and energy cost have been re-worked to reflect AoE effect.
- Cooldown increased to 15 seconds base.
- New Advantage: "Feel The Force". Feel the Force allows Containment Field to apply Eaves to affected targets.


Redirected Force
- Damage reduction from this power has been increased per rank. (15%/20%/30% - Rank 1/2/3 respectively)
- Now additionally grants damage absorption similar to old IDF.
+ Damage bonus now applies to ALL damage but has been lowered to: 5% / 10% /15% - Rank 1/2/3 respectively.
+ Cost of maintaining this power has been reduced by 20%.
+ SFX for Redirected Force has been adjusted to get rid of the electric sound on activation.
+ Damage bonus gained from this power now caps at 4.

The list of powers below (will be added as time goes on) are new abilities which I would add to the power set to flesh it out more and perhaps grant it more flexibility in terms of portraying a more defensive play style. (I've got quite a few ideas for it, so stay tuned!)


New Power – Kinetic Reverberation – Energy Unlock
+ Grants energy when you attempt to KNOCK an enemy with your Force powers.
+ Grants additional energy when you apply or strike targets affected by Eaves, Compression or Disruptive Force.
+ Scales with Recovery but is still affected by your Endurance.

+ Summons a large force field in front of your current position which shields you and any allies behind it from incoming damage.
+ Summoned force field utilizes new threat absorption mechanics which redirects all threat from shielded allies into the field.
+ The summoned force field has a protection field style force field (159,999 force field) and 1 HP and has 20% innate damage resistance.
+ This ability cannot be ranked up and has no advantages.
+ This force field cannot be affected by any support auras, healing, caster super stat bonuses, caster defense and cannot be shielded. Additionally it does not benefit from any specializations.
+ This ability lasts for a maximum of 50 seconds and has a nonadjustable cool down of 3 minutes.
+ Upon activation this ability drains 90% of your maximum energy and places an energy generation debuff on you.
+ Standing behind this summoned force field removes this debuff and grants you a small EoT.
+ If the shield is destroyed before its maximum duration, it will detonate granting a burst of energy to you and shielded allies as well as a minor damage boost (10% damage boost).

- Ranged Combo power (a series of three clicks similar to Telekinetic Strikes but activates slower), five targets maximum. 100ft range.
- Deals Ranged AoE Crushing Damage which increases per strike with the highest damage hitting at the end of the combo.
- Completing a Force Barrage combo will apply "Eaves" to your primary target and any nearby targets.
Advantage: Defensive Strikes
- Force Barrage now provides a damage shield effect (up to 300 points of damage)., at 3 stacks you cannot gain any more stacks until the damage shield portion of this effect is thoroughly depleted.
Advantage: Disruptive Strikes
- This advantage gives Force Barrage an escalating chance to apply "Disruptive Force" to targets per click. (30%/60%/90% chance)
- "Disruptive Force" debuff reduces enemy movement by reducing their ability to move by 30% per stack and causes enemies with close proximity to gravitate towards each other. This stacks to three & has a global cap of 6.

Notes: The gravitation part of "Disruptive Force" does not apply to the following enemies, however the movement reduction will:

(Concept is similar to mini Gravity Drivers slamming down on enemies. Only similar VFX I can find is this: (Sue Storm's Crushing Force ability from MH) 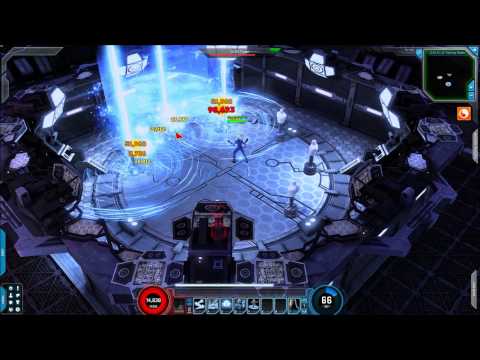